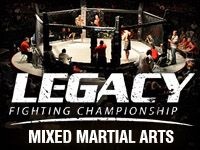 HOUSTON, TX – May 25, 2011 – The Legacy Fighting Championship has been added to the HDNet summer broadcasting schedule for Professional MMA with the next Legacy event set to broadcast live on the network from Houston’s Arena Theater on Friday, July 22, 2011.

“I am excited for the debut of Legacy Fighting Championship on HDNet,”says HDNet Fights CEO Andrew Simon. “This deal furthers our commitment to bringing more top MMA events to our fans than any network in the world.”

Echoing that sentiment, Legacy Fighting Championship President Mick Maynard added, “We are excited about our debut on HDNet and the opportunity to show a national audience the level of competition and support we have in Texas for MMA, especially in Houston.”

With the July event serving as its’ national broadcast debut, Legacy Fighting Championship has brought in notable veterans that have competed internationally to go along with some of the best local and regional talent Texas has to offer. As of today, some of the names scheduled to compete at the event include UFC and Strikeforce veterans Carlo Prater, Cameron Dollar, and Pete Spratt, along with current Legacy welterweight champion Mike Bronzoulis and WEC-veteran Frank Gomez. Bellator veterans Chad Robichaux and Jonathan Mackles are also scheduled to face each other on the card.

Also set for the July 22nd event is ‘Jesus Didn’t Tap’ brand owner and former ‘Mighty Morphin Power Rangers’ star Jason David Frank. Starring on the show for four seasons from 1993-97, the actor transitioned to MMA with a background in American Karate last year. He now hopes to make waves at Legacy through his second professional bout against Shawn Machado, an opponent chosen for him via fan voting.

For more information on the Legacy Fighting Championship and to view the July 22nd card in further detail, please visit the official website at www.legacyfights.tv.

Legacy Fighting Championship has promoted professional and amateur MMA events for over four years. Throughout its history, the emphasis has always been maintaining the commitment to provide only the highest-quality mixed martial arts competition for fighters and viewers alike. Legacy’s continued goal is to maintain that quality while evolving and growing organically with the sport of MMA.

This site uses Akismet to reduce spam. Learn how your comment data is processed.